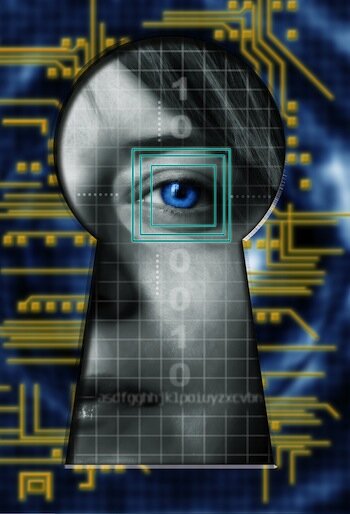 Take a step back with me to regular paper printers, like Xerox and Epson. Despite their dated inability to fathom the third dimension, these machines are still pretty handy for boring stuff like documents and photos. Sometimes people print coupons, directions, and grainy pictures of their cats. Other times people print ransom notes, death threats, and money. At least they try. Or at least the government thought people would try (okay, so they were right). The point is: the big printer manufacturers program their printers to add very tiny and faint dots or text to everything that’s printed. These watermarks aren’t easy to see unless you really know what you’re looking for, but their purpose is multifaceted.

The process of hiding a message inside a message is called steganography and originally these codes were implemented to convince the government that the printers couldn’t be used to forge money; any bills with mysterious dots that showed up under certain lights would be known to be counterfeit. Now however, the codes store information like the model and serial number of the printer and timestamps. That’s pretty useful forensic data. Apparently printing on paper is not entirely anonymous.

You’re a smart reader so I’m sure you see where I’m going with this. The liberty of 3D printing is probably at stake. I’m being intentionally pessimistic here so bear with me. 3D printers have already caused a splash that’s rippled through the courts, and that was just over game figurines. Consider too that Stratasys recently canceled a client’s leasing of one of their printers because they didn’t approve of what that client was intending to use it for: to work on creating an open source gun. Said client had not yet even used the printer. So circling back — what’s to keep 3D printer manufacturers from programming their printers to do something similar to what the paper printers have been made to do? What if they go further and install specific limitations on their printers so that they can’t print certain forbidden objects? What if your MakerBot sent an alert to HQ if you tried to print a gun, or what if it returned a copyright infringement error if you tried to print a Nike swoosh? I’m sure IP attorneys would lobby for it.

Considering that much of the 3D printing market is still hobbyist and DIY driven, some comfort can be taken that plans to install tracking-enabled printers would find difficulty dealing with those making their own printers. Maybe it’ll never happen. Perhaps some 3D manufacturers will make a point to ensure their customers’ privacy by refusing to install such features when others do. Regardless, enjoy your “freedom” to anonymously 3D print “whatever” you please while it lasts.

To give you a flavor of the secret tracking codes found in 2D printers, here’s a 2008 video created by digital rights watchdog, Electronic Fronteer Foundation (EFF), that explains the process:

Cameron, Senior Staff Writer, is a technology enthusiast that can better write about 3D printing than he can ride a bike. His interest in 3D printing is mostly driven by his desire to become a cyborg. He enjoys philosophical conversation and is also fond of poetry and Star Trek. Connect with him on Google+. View all posts by Cameron Naramore »
« Disney’s “Printed Optics” – 3D printing optical elements for interactive displays, sensors, and illumination.
Makerbot Replicator 2 introductory tutorials »

One Response to “Could your 3D printer someday spy on you?”