The desktop 3D Printer opportunity, from the Stratasys Investor Conference.

The 3D printer space has seen acquisition after acquisition in the last couple years, most aggressively by 3D Systems (DDD) who has gobbled up more than two dozen companies. But today we see the biggest buyout in the industry since Stratasys merged with Objet last year. Stratasys (SSYS), a considerably less acquisitive company than its competitor 3D Systems, has just made a bold move to acquire privately held Makerbot, the leading name in consumer 3D printers.

The “definitive merger agreement” is valued at roughly $403 million, which will be paid in Stratasys stock. The two companies held an investor’s conference call this morning, and you can see a short PowerPoint presentation of the call here and listen to it here. I’m awaiting an interview to be aired on CNBC with the CEOs of both companies, and when the video is subsequently posted online, I’ll embed it here.

Makerbot will operate as a separate entity, continuing with its own branding and marketing. This is a wise decision as Makerbot has attained a definitive brand awareness in a sea of inexpensive personal 3D printers. It’s the most well-known brand by far, and maintains its lead despite being more expensive than most competitors.

Press reports this morning in the investment media are replete with headlines that say that Stratasys buys “rival” Makerbot. As usual, most media still don’t understand the 3D printing industry. They are not rivals, serving completely different markets, with a big chasm separating the price of the Makerbot Replicator 2 and the lowest cost Stratasys Mojo line of printers.

Rather than buying a rival, Stratasys purchased a company that complements their line of printers, extending their reach into the consumer market. That’s not to say they would not have been rivals in the future, though. The Stratasys models were coming down in price and the Makerbot printers were moving up in functionality and power. Better to team up now.

Yes, there are several popular, low-priced desktop 3D printers, but there are only two that have three billion dollar companies behind them — 3D Systems’ Cube and now the Makerbot Replicator 2. These are now the two heavyweights that will duke it out in the low-end, desktop 3D printer market. The two printers, although in the same general price range, are very different printers. The Cube is a slick looking, plug-and-play unit that is very easy to use, while the Replicator is a boxier looking unit that requires a bit more technical aptitude. However, the Replicator 2 offers more power and flexibility. I give the advantage to Makerbot here. 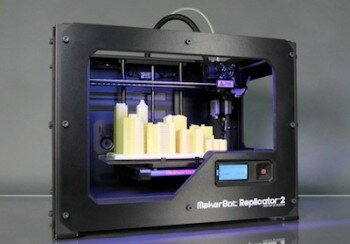 But there is another big advantage for Makerbot over the Cube, and that is the organization behind it. Makerbot is, and will continue to be, operated by a scrappy company that still has the entrepreneurial feel of a start-up. The company is simply on fire, with a true following of fans. The brand is cool. The printers are cool. The Makerbot store is cool. And even CEO Bre Petris is cool.

And being cool is apparently translating into sales. They are selling the hell out of their 3D printers. Founded in 2009, they have the largest installed base of 3D printers. They’ve sold 22,000 printers since opening their doors, but here’s the most important fact: they’ve sold 13,000 units in the last nine months alone. And look at the revenue growth: In fiscal year 2012, they generated revenues of $12.7 million, but in just the first quarter of fiscal 2013, they were already at $11.5 million.

Thingiverse is important too

And there is another part of the deal that has value, outside of the Makerbot hardware and software. Thingiverse is part of the acquisition. This online repository is the world’s largest for 3D printing models, visited by hobbyists to engineers, and everyone in between, and is not to be taken lightly. There are 90,000 files available to over 500,000 unique visitors a month, who are downloading one million files per month. And monetization is beginning, as they explore strategic partnerships with companies such as Nike, Lego, Apple and Nokia. Sure, cynics might say that anyone can start such a site and compete with them. In theory, yes, but it’s more difficult to do as a practical matter. Give it a try and let me know when you surpass them.

Is this good for Stratasys stock?

So, will it end up being a smart move for Stratasys in the long run? As an investor in SSYS (and DDD), I’d like to know if Makerbot will be accretive to Stratasys earnings. I have not seen an analysis of this yet, but I doubt it will at first; Makerbot has invested heavily in its growth and profits are likely yet to come.

There are huge risks in playing in the low-end market, and that’s one of the reasons I preferred my (larger) SSYS investment over my DDD shares. The low-end 3D printer market is a cutthroat, highly competitive arena, which translates to a low-profit business. The only thing that can overcome this is if Makerbot can maintain and enhance its brand, much in the way Apple or Dell did. It may not be easy, but if any company is able to do it, it’s Makerbot. CEO Bre Petis is a hell of a smart guy, and has proven himself already. Despite the competitive market, I have a gut feeling that it’s going to work out. The brand is just too strong. And as more and more buyers come in who are not very familiar with 3D printers, they will want the comfort of a brand with a good name behind it — they are not going to be buying printers on Kickstarter.

As a Stratasys shareholder, I am hoping for the best, and am reasonably confident this will all work out well. The stock market seems to believe it’s quite a positive move for Stratasys. As I finish up this article, the stock is up about 2% with the market suffering heavy losses of about 1.5%.

Brooklyn, N.Y., June 19, 2013 – Stratasys Ltd. (NASDAQ: SSYS), the leader in 3D printing and additive manufacturing, and MakerBot, the leader in desktop 3D printing, today announced the signing of a definitive merger agreement whereby privately held MakerBot has agreed to merge with a subsidiary of Stratasys in a stock-for-stock transaction. MakerBot, founded in 2009, helped develop the desktop 3D printing market and has built the largest installed base of 3D printers in the category by making 3D printers highly accessible. The company has sold more than 22,000 3D printers since 2009. In the last nine months, the MakerBot Replicator 2 Desktop 3D Printer accounted for 11,000 of those sales.

The combination of these two industry leaders is expected to drive faster adoption of 3D printing for multiple applications and industries, as desktop 3D printers are becoming a mainstream tool across many market segments. Upon completion of the transaction, MakerBot will operate as a separate subsidiary of Stratasys, maintaining its own identity, products and go-to-market strategy. The merger enhances Stratasys’ leadership position in the rapidly growing 3D printer market, by enabling Stratasys to offer affordable desktop 3D printers together with a seamless user experience. The merger is expected to be completed during the third quarter of 2013; and it is subject to regulatory approvals and other conditions customary for such transactions.

MakerBot’s products are increasingly used by prosumers, including engineers, designers, architects, manufacturers, entrepreneurs and individuals, for professional purposes, as well as for personal applications. Bre Pettis, CEO and co-founder of MakerBot, will continue to lead the company. Pettis is a leader in the 3D printing industry, with a mission to drive further adoption of the company’s products.

“MakerBot’s 3D printers are rapidly being adopted by CAD-trained designers and engineers,” said David Reis, Stratasys CEO. “Bre Pettis and his team at MakerBot have built the strongest brand in the desktop 3D printer category by delivering an exceptional user experience. MakerBot has impressive products, and we believe that the company’s strategy of making 3D printing accessible and affordable will continue to drive adoption. I am looking forward to working with Bre,” added Reis.

“The last couple of years have been incredibly inspiring and exciting for us,” noted Pettis. “We have an aggressive model for growth, and partnering with Stratasys will allow us to supercharge our mission to empower individuals to make things using a MakerBot, and allow us to bring 3D technology to more people. I am excited about the opportunities this combination will bring to our current and future customers.”

Under the terms of the merger agreement, Stratasys will initially issue approximately 4.76 million shares in exchange for 100% of the outstanding capital stock of MakerBot. The proposed merger has an initial value of $403 million based on Stratasys’ closing stock price of $84.60 as of June 19, 2013. MakerBot stakeholders also qualify for performance-based earn-outs that provide for the issue of up to an additional 2.38 million shares through the end of 2014. The proposed earn-out payments have an initial value of up to $201 million based on the Stratasys closing stock price as of June 19, 2013. Those payments, if earned, will be made in Stratasys shares or cash (in an amount reflecting the value of the Stratasys shares that would have otherwise been issued at the relevant earn out determination date), or a combination thereof, at Stratasys’ discretion. The merger is expected to accelerate Stratasys’ growth rate and be slightly dilutive to Non-GAAP earnings per share in 2013, and accretive to Stratasys Non-GAAP earnings per share by the end of 2014.

Stratasys intends for MakerBot to operate as a separate subsidiary, preserving its existing brand, management, as well as the spirit of collaboration it has built with its users and partners. Together with Stratasys, MakerBot will continue to innovate, expand its product offering, provide attentive service to its users and make more 3D printing content available through Thingiverse.com.

Upon completion of the merger, Stratasys and MakerBot will jointly develop and implement strategies for building on their complementary strengths, intellectual property and technical know-how, and other unique assets and capabilities. The opportunities could include accelerating MakerBot’s reach by leveraging Stratasys’ global infrastructure; cross-promotion of products into the installed base of the combined companies; and leveraging Stratasys’ extensive know-how in Fused Deposition Modeling (FDM) to benefit MakerBot’s product line.

MakerBot reports that during the first quarter of 2013, the company generated $11.5 million in total revenue, compared to $15.7 million for all of 2012. Thingiverse.com, MakerBot’s online content portal for the sharing of user-generated digital design content, has more than 90,000 3D product files available for sharing, and generates more than 500,000 unique visitors and 1,000,000 downloads each month. The accessibility and ease-of-use of this 3D printing content helps promote system usage.

A majority of MakerBot’s sales are via direct-to-consumer channels on the company’s website. MakerBot also sells through distributors outside the U.S. and has the MakerBot store, the first-ever 3D printing retail store, which serves as both a desktop 3D printing demonstration site and brick-and-mortar sales location in New York City.

Desktop 3D printer usage among design and engineering professionals is growing rapidly. Stratasys and MakerBot estimate that between 35,000 to 40,000 desktop 3D printers were sold in 2012. This number is estimated to double in 2013, as prosumers increasingly adopt desktop 3D printers for a broad range of applications. Stratasys believes that the unique MakerBot user experience along with the affordability and accessibility of their products, materials and services will help to grow the rate of adoption for desktop 3D printers.