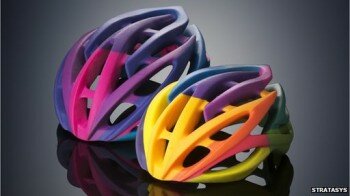 Stratasys has announced the launch of the world’s first multi-color, multi-material 3D printer.

Aptly titled, with a name as long as the list of features that it offers; the “Object500 Connex3 Multi-Material” 3D printer retails for $330,000.

With a price like that, Stratasys is targeting industrial designers and manufacturers. The idea behind this multifunctional 3D printer is to speed up production, and cut down on the number of prototypes that manufacturers need before designs can be brought to market.

The 3D printer combines traditional 2D printer color options with the multi-material printing capabilities. It features “Triple-jetting” technology that allows three base materials, reducing the need for separate runs to paint, thus decreasing the production time needed. Stratasys estimates that it can help to reduce the time that it takes to bring prototypes to market by 50 percent.

While there are other 3D printers, such as the ProJet5500X , these printers only offer a small range of colors including black, white, and gray. The Object500 Connex3 offers not only a wide variety of colors but materials as well.

The levels that the Object500 Connex3 can reach are unpredictable. Already, the team at Trek Bicycle has beta tested the printer, using it to create bike chain guards and handlebar grips.