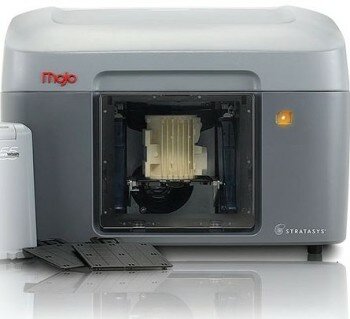 With 3D printing already making revolutionary advances in the field of medicine, it’s no surprise that it’s also entering the world of dentistry and starting to make changes for the better.

The new printers are known as “CrownWorx” and “FrameWorx” and are said to have the highest precision for wax printing.

The FrameWorx has the same specifications as the CrownWorx, yet is designed for creating partial denture wax-ups. The 3D wax printer jets micro-drops of TrueCast material onto the build tray, creating a denture wax-up layer-by-layer. It will then be sprayed with the TrueSupport material, which will form the supporting structure. TrueSupport is a wax blend material that is automatically generated to protect a wax-up while it is printing, allowing for increased production speed. After the wax-up is printed, the TrueSuport material is dissolved, leaving behind a super smooth yet detailed wax-up.

Avi Cohen, Stratasys Director of Global Dental, says that the 3D wax printers are ideal for small labs that are interested in upgrading their dental casting technology.

“We believe dental labs adopting these 3D printers will benefit from the automated and digitized workflows, enabling them to cut costs while producing more restorations,” Cohen said. “These systems complement our broad system portfolio, which includes large dental 3D printers.”