By complete chance, while skimming my feed today, I came across one of the most stunning videos I’ve seen in some time. After a moment of awe, it occurred to me that what I was watching looked 3D printed. So I looked it up, and sure enough, it is. Here’s what I was watching:

This “Transform Robot” is the culmination of 10 years of work by Japanese Kenji Ishida, creator of Brave Robotics. If you go to the website you’ll see that it took awhile to get the transformation so quick and smooth and awesome. It even sounds like the trademarked robots that shall remain unnamed. It drives, walks, has lights and a wirelessly networked camera, and it even shoots missiles and has action poses! That’s a fully-loaded car.

Ishida built three versions before buying a CNC machine and version 6 required building his own CNC machine. But to get beyond version 7, that took building a 3D printer. Because when the mechanics and electronics work well, it needs to look good doing it too. The plan for 2013 is to double its size; AI is to be added in 2015, and a full-size version that people can ride in is the ultimate goal by 2030. Based on what he’s achieved so far, that doesn’t sound as crazy as I think it should. I’m sure he’ll need better 3D printers for that though.

And to answer the question that I’m sure you’re thinking, yes, you can buy one. At least, the website says you can. But only if you’re willing to part with $24,750. 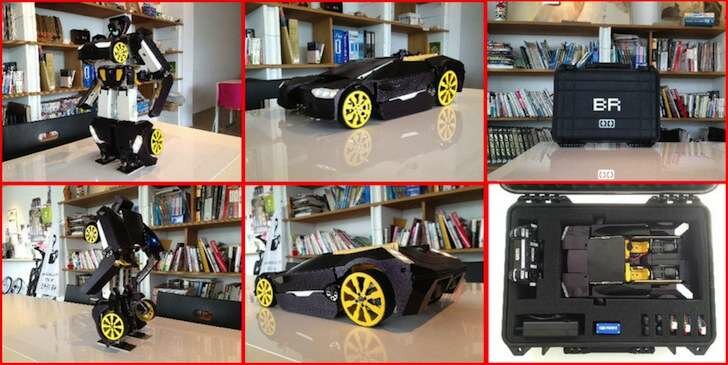