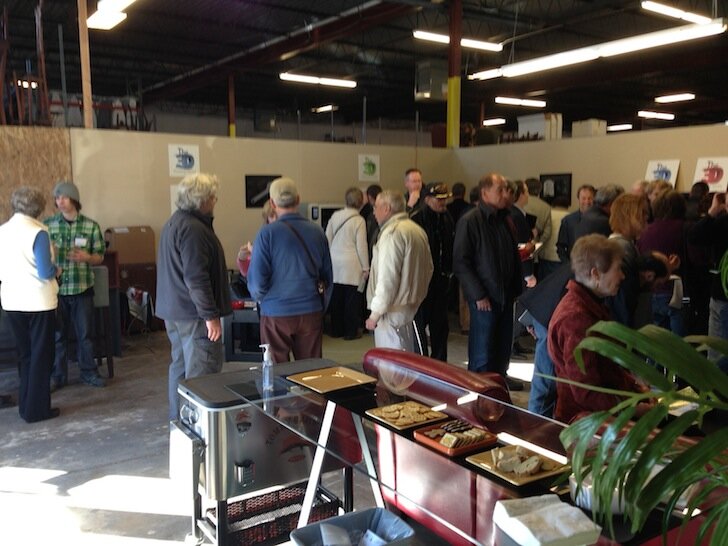 The 3D Printing Store in Denver had an Open House turnout of 400 visitors.

A couple days ago I had a wonderful conversation over coffee with a Debra Wilcox, Principal of The 3D Printing Store in Denver, Colorado. Serving as a physical retail 3D printing service, T3DPS is the first of its kind, though it certainly will not be the last. What separates T3DPS from hackerspaces is that there are no member fees; anyone that walks through the door can have something printed. And unlike online printing services like Shapeways, you don’t need a digital file, because there are 3D modelers in house, and you retain all rights to whatever you have printed. So what did we talk about?

What didn’t we? Personal 3D printers, Thingiverse, mining asteroids, and we both shook our heads in amazed disbelief over how quickly bioprinting [https://3dprinter.net/3d-printing-with-stem-cells-paves-way-for-creating-human-organs] is advancing, even in the DIY space. Debra is a lawyer with a background in green aeronautics and biofuels, so her excitement over 3D printing makes sense considering its additive and sustainable nature. While she doesn’t have much technical expertise, she operates the two MakerBot Replicator 2s and the Stratasys uPrint just fine, and what she lacks in experience she makes up for in networking abilities. The 3D Printing Store opened in November (shame on me for only just finding out) and Debra has been hard at work expanding a “mini cluster” of innovation ever since. Mini is a conservative word here, as even though she doesn’t yet have a metal printer in house, she can upstream orders of metal prints, and the same goes for 3D scanning, though she admitted that the costs for scanning are currently beyond most clients’ budgets, and not as simple as most anticipate. There are also engineers on staff to help clients with prototyping, which Debra reports is a popular service offering, because getting injection molded parts is just way too expensive for amateur (and established) inventors.

T3DPS hosted an open house on February 7 and 400 people showed up to the small warehouse, quickly creating a standing-room only situation, with people ten deep trying to get a glimpse of the six printers printing away. Six because Lulzbot, a Loveland, Colorado based 3D printer company, brought three of their printers to show off too. What Debra found to be especially promising is that there were people of all ages there, with equal amounts of curiosity and interest from kids as from the 70 year olds that actually know how great 3D printing is compared to the machine shops and expensive casting of yesteryear. As such, T3DPS will be hosting classes and workshops to help familiarize people with modeling for 3D printing, and some will be just for the youngsters. Debra told me that there will be another open house on February 28, so if you’re in the area, The 3D Printing Store will be the place to be. I hope to see you there!