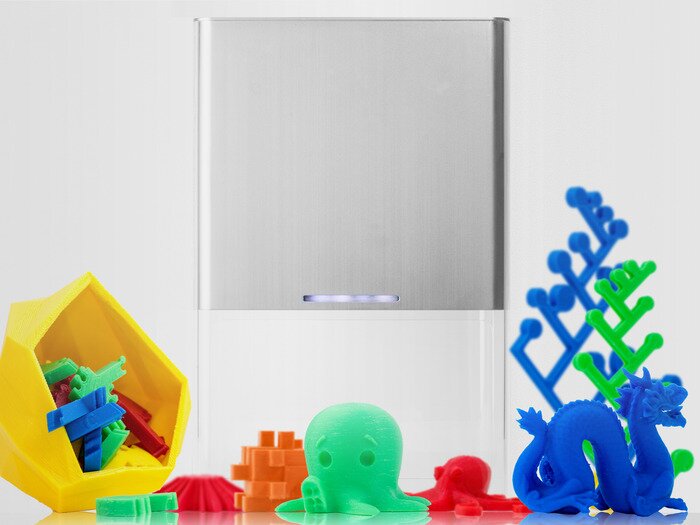 These pretty printers are going to be popping up more and more. And I don’t just mean the physical aesthetics; simple and clean GUIs are proving to be a very desirable trait. The Form 1 led the way and the Zortrax M200 is the most recent. Well, it was. Now there’s the Buccaneer from Pirate3D Inc.

This, like the Zortrax, is a very consumer-aimed printer. It looks like a giant iPhone. Its outsides are all brushed aluminum and and clear acrylic, and all the mechanics and electronics are hidden from view. That might not sound like a big deal, but tell that to the 1,000+ backers from the first day of its campaign. Sure, some are backing it for its ease of use through Cloud Printing. Others like that it’s fully assembled. And others still like that it’s $297 (actually the $297 lot sold out, next level is $347). Yes, a fully assembled 3D printer with cloud-based slicing and file preparation for less than $400 shipped (if you’re in the US, Canada, or Singapore; extra for international shipping).

The Buccaneer is wifi enabled, so it doesn’t have to be connected to a computer. To print a file, an .stl is sent to the cloud where it’s sliced and supports are added if necessary, and it’s then sent to the Buccaneer to print. Don’t worry, the cloud isn’t required. Files can still be sliced on a local computer and sent directly to the printer. There are also cartridges of plastic that rest in a bowl on top mostly out of sight. Normally I’m very against cartridges, but these don’t bother me much for two reasons: they’re priced fairly (just over $1/ounce, which is about what spooled filament costs) and they aren’t required. Spooled filament can be used. Here are the other specs:

Yes, that’s a small build volume. Apparently they want the Buccaneer to fit on ANY desk. If it wasn’t for the tiny build volume I’d likely have backed it. Otherwise, bravo! It’s a beautiful printer and looks fool proof. Having reached its $100,000 goal in 8 minutes, it’s now over $400,000 a couple days in. It will be the new cheapest fully-assembled 3D printer after it’s actually shipped. Watch out Solidoodle.