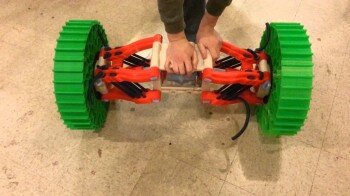 Designer and architect Michael Curry of Kansas City, Missouri has created a fully 3D printed electric vehicle, which he claims is the country’s first.

Weighing in at 70 pounds, the electric vehicle is essentially a supersized RC vehicle, and is the result of several months’ work. Curry has been working on the vehicle since December 2013.

A former employee of MarkerBot, Curry describes himself as a “3D printing evangelist.” Curry has always pushed the boundaries of what can and cannot be done. His 3D printed car isn’t the first work he has done with 3D printing. Curry has also designed other 3D printed works and listed them on Thingiverse.

When others said it wouldn’t be possible to fully print a 3D printed vehicle, Curry set out to prove them wrong. The parts were printed over a period of a few months, using two MakerBot Replicators. Curry says that while he had no idea how to build a 3D printed car, the 3D printing technology and the internet made it possible.

“What makes the 3-D technology so impressive is that you don’t have to know how to build a car to build a 3D version of the car,” Curry says.

Curry believes that 3D printing will transform the world, and that in a short span of time, just about every family will have their own 3D printers to create almost anything –on demand.

Michael Curry and his work were at the Bay Area Maker Faire earlier this month, and he has plans to be at Union Station’s Maker Faire, June 28-29.

You can read more at KSHB in Kansas City, who originally showed the 3D printed RC in action.