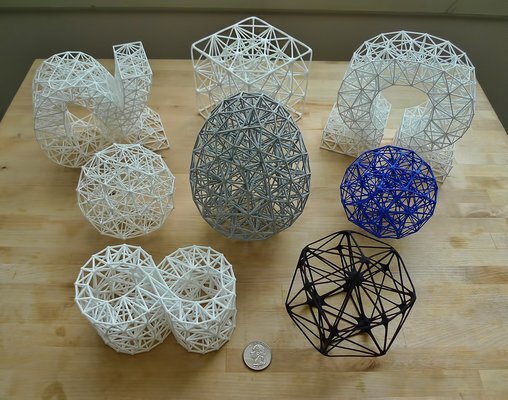 When I wrote about Dizingof’s tetrahedral meshes, a Todd Doehring, Ph.D. commented to inform me that he was the first to produce 3D printed tetrahedral models, what he calls meshagons. I love those types of comments because they end up in me learning so much, so I got in touch with Todd.

3DP: This method of model generation is very intriguing. Tell me about your program.

TD: The main tetrahedral mesh generation program was written by me over the last 10 years or more. It is called VolMesh. It is based on the work of Olaf Persson’s ‘Distmesh’ program. I did this for bioengineering analysis and also for teaching in class (and also because I’m obsessed with meshing). The idea is to take a volumetric image, either from MRI/CT, or from a generated/drawn object, and automatically convert it to a high quality tetrahedral mesh.” 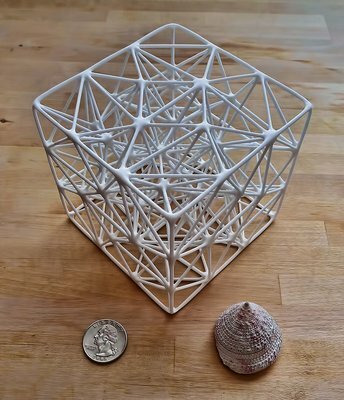 3DP: And then it’s ready to print?

TD: This is the base mesh generator for the Meshagon project, but I had to make several changes to generate the Meshagons suitable for printing. One big change was to remove ‘slivers’ or thin tetrahedra, which are not suitable for 3-D printing. Slivers are hard to remove, especially for complex objects. This took a lot of work. 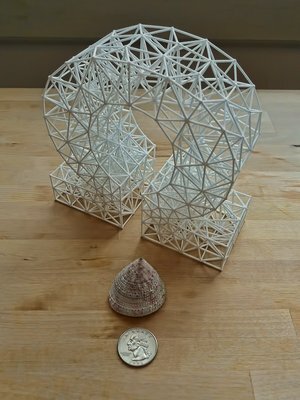 3DP: And then it’s ready to print?

TD: After I achieved suitable wireframe meshes, the next step was to try and convert them to printable objects. First, I tried ‘skinning’ in Blender3D but it would not work. Skinning cannot achieve manifold for complex joints/objects. This turned out a lot more difficult than I thought it would be. I’ve been working on it for almost a year now.

3DP: You clearly got it to work very well. What are your plans for the software?

TD: I’m definitely going to have a crowdfunding for the meshagons. I’ll be offering ‘intro’ perks like a choice of small intro 2″ meshagon sculptures, 6″ medium size, and 12″ large size. Ultimate perks could be custom meshagon sculptures. I will work directly/personally with the contributor to make whatever they want (given some parameters). The main goal of the campaign will be to fund software development to enable release of a software system. There’s a lot of work that needs to be done… code needs to be ported from Octave, GUI, etc. Another possibly easier possibility would be a Blender3D plugin. 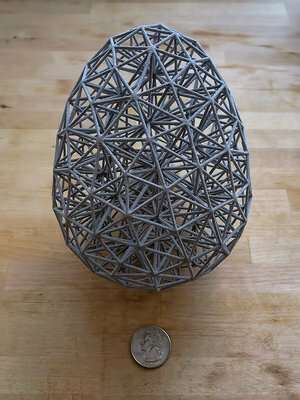 I would love for it to become a Blender plugin because it already has 3D printing tools built in. Todd is also working on a skin for the meshes, which is necessary for engineering components, and really anything that’s going to be handled and used. There are many applications for such models, from biomedical to architectural. “Since meshagons are directly developed using a Finite Element method, analysis of part strength and integration with larger systems can be accurately done. Ultimately, meshagons can be parametrically adapted to optimize strength while minimizing part weight.” 3D printing already boasts high strength/weight ratios, and this technology will improve it even further. If you’d like to read more about Todd’s process, check out his website.