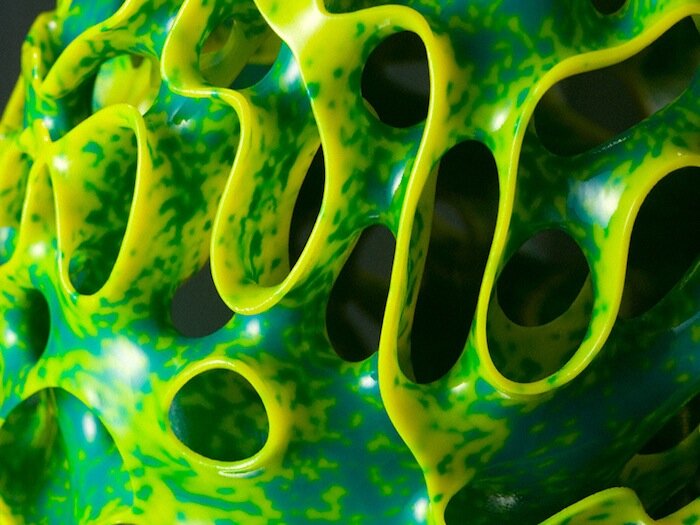 Will a multiple-color Objet 3D printer be announced May 8, 2012?

Last Friday we published a fascinating story, with photos and video, entitled MIT’s Neri Oxman on 3D printing in art and design. (I highly recommend you read it and especially watch the video.) But after reading something from a fellow blogger, perhaps we should have titled the piece, “Objet 3D printers print in multiple colors and never told anyone.”

It turns out that blogger Rachel Park was in Paris, and was invited to attend Objet’s media event in the Multiversites Creatives exhibition at the Centre Pompidou. At the event was a catalogue of Neri Oxman’s work, which Rachel was able to view and study, up close and personal.

After admiring the fantastic photos, which she says put to shame what we see on website images, it hit her: the stunning art pieces were not painted or otherwise finished after being 3D printed — they were 3D printed in full glorious multiple colors! So what? Here’s what: Objet’s 3D printers don’t print in color. Multiple materials, yes, Colors no.

What did Objet have to say about the multiple color printing? Here is Rachel on this:

During the short(ish) presentations from Objet’s Chairman, Elan Jaglom and Neri herself, which took place prior to the guided tour of the collection, there was no announcement, indeed there was absolutely no mention from either of them directly relating to the colour capabilities of the Connex technology. There was talk of the R&D investments and the extensive range of materials Objet offers from Elan (again a separate blog post on my interview with Elan will follow) and an introduction to the Imaginary Beings concept from Neri, but not a single word about 3D printing in full colour.

Also, after having spoken with a few of the Objet guys directly, all of whom had a glint in their eyes but totally played the whole thing down, the exhibition was unanimously labelled as “a technology demonstration” of the R&D Objet has been doing. They could not over-stress the fact that the colour capabilities are not commercialised yet and neither is there an official timeline for when they will be, well, none that Objet is giving away anyway. But be left with no doubt — they will be.

Very interesting. Is Rachel right in how she interpreted this? Does Objet really have a stealth color printer they are teasing us with? You can see Oxman’s work here on her website and judge for yourself. Let me know what you think.

The bigger picture: maybe this is the promised Stratsys “magic”

But for a bigger picture, let’s put a couple pieces of information together. On April 30, we ran an article entitled, May 8, 2012: Stratasys will announce “the magic.” That article brought attention to the rotating banner on the Stratasys site that has a countdown timer that says, “Something’s Coming. The magic begins on May 8. Check back to see what’s new in the world of 3D printing.” Hmmm…that’s tomorrow. Interesting timing, isn’t it?

But wait, you say, that’s Stratasys’ web page and the slick multi-colored works of Oxman’s were printed on an Objet printer. Well, not so fast. don’t forget Statasys and Objet merged in April.

Multi-color, multi-material 3D printing seems like it could very well be the “magic” to me. We’ll find out tomorrow.

UPDATE: I was wrong. Here’s the announcement on what they announced: the Stratasys Mojo.

Mark is the founder of 3DPrinter.net. He encourages anyone reading this to submit their own article for publication. Connect with him on his Google+ account. View all posts by Mark Fleming »
« 3D Printing Beautifies and Personalizes Prosthetic Limbs
Printxel: $300 DIY 3D printer kit sells out on Kickstarter in eleven hours »