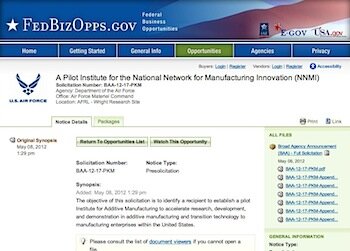 The solicitation for the Pilot Institute for the National Network for Manufacturing Innovation (NNMI). CLICK TO OPEN.

Well, what do you know! The military has finally embarked on a project that may actually reduce their costs. The Pentagon just announced that they are offering up to $60 million for a new 3D printing institute, with the ultimate goal of cheaper and faster manufacturing of defense and aerospace parts.

The Pentagon is soliciting universities and nonprofit organizations to launch the pilot program, as described in this document. And they are moving fast; A “proposer’s day” will be held on May 16, and proposals are due on June 14. $18.8 million of the $60 million is expected to be spent in 2012. That’s fast by any measure, especially for the government.

According to the public announcement at manufacturing.gov, Applied and basic research at the Pilot Institute may be funded by the participating agencies. This research will pursue a wide range of advanced capabilities, including:

Overall, the military wants to utilize 3D printing for the same reasons that businesses do: to save money while producing products after — in this case, weapon and related technology. And, in addition to the monetary benefits, there is the ability to allow personnel on the battlefield and forward bases to be able to print out parts and eventually complete, ready-to-use items without having to wait for delivery.

I’m sure one or both of the big 3D printer companies, 3D Systems and Stratsys (including Objet) are going to be getting some government contracts soon.

Mark is the founder of 3DPrinter.net. He encourages anyone reading this to submit their own article for publication. Connect with him on his Google+ account. View all posts by Mark Fleming »
« 3D printed Fenway park model tours Boston
Makerbot grows, takes entire floor of Brooklyn highrise »

Leave a Reply to Will Shambley Cancel reply