In some states it’s legal for certain individuals to possess and use marijuana medically. In Colorado, where I live, the recent passing of Amendment 64 made it legal for anyone 21 and older to have up to an ounce on them. Currently though, until the task force nails down the specific rules on its sale, it’s still only being sold to those with medical licenses called “Red Cards.” So for now, Denver remains without a constant haze over it, though it will take a few days for the smoke to clear after 4/20.

Regardless, if for whatever reason you do smoke the ganja, you’ve probably used bongs before and know that they deliver epic mushroom clouds of stonage. No other method of smoking can put as much smoke into your lungs in a single breath as can a well-designed bong; it’s just science. And Thingiverse hasn’t left the stoners out, as there are three pages of water pipes/bongs. Here are my favorites:

I’m starting with this one for three reasons: it’s silly, it has interesting dialog in the comments, and it’s an example of what not to do. Everybody loves Mario, but not everyone loves guns, and the same is true of marijuana, so the fact that Thingiverse has banned one (guns) and not the other bothers some users. It’s mentioned that guns are legal while marijuana is not (federally), so the censoring seems arbitrary. It’s also mentioned that paraphernalia doesn’t have to be used for marijuana, but can be used for tobacco, and other legal herbs. What do you think? As far as what not to do — there is absolutely no reason to include a printable slide here, as the heat generated by the burning herb will surely melt it and cause you to inhale toxic fumes. ALWAYS use a glass or metal slide.

With slim shoots, this one is designed to hold ice, which gives a cooler, smoother inhale. Just add slide/bowl.

I like this one because it repurposes mason jars, which are great to have around. Since they’re clear, you can see the cloud forming, which is always fun.

13 in percolated water pipe/bong by TREV 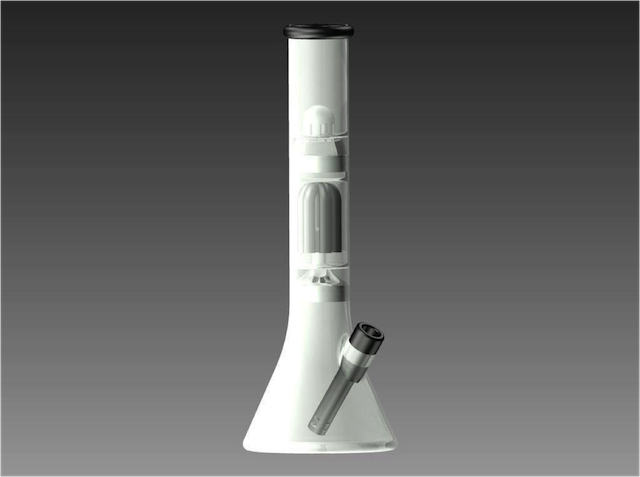 Rocket or bong? Sometimes it’s hard to tell. This has an ice catch and percolator, so it’s fancy schmancy. Just add slide.