Last week I covered human anatomy on Thingiverse; rad stuff, but mostly for show and educational purposes. Robotic arms though, they’re a bit easier to get functional. Print some joints, add a few servos and small metal bits, attach a microcontroller, and you’re on your way to having your own miniature robotic assistant. These arms are very rudimentary and a little clunky, but we know how these things go; the designs will be refined and the operations will improve as more people print and play with them. As you enjoy these printable robotic arms, I encourage you to think of how you might put them to use.

This is well weighted, so it moves smoothly at slow speeds with (at least) 5 degrees of freedom. You can see it working here.

Robotic arm with 7 servos by jjshortcut

This was CNCed out of hardboard, but could also be printed. This arm is controlled by an Arduino board, the current go-to controller for DIY electronics-involved projects. It’s a little top heavy, but the sound it makes is adorable. Check it out.

Robotic arm with 6 DOF by ancastrog 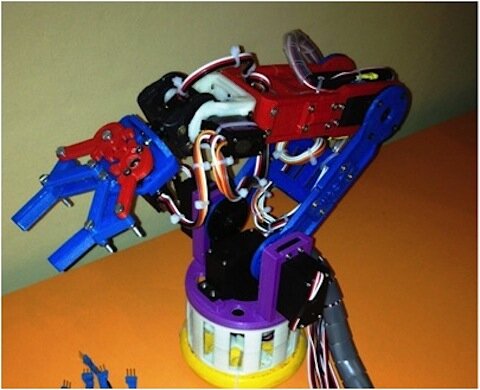 What I really like about this one is that the software is included, and this arm is also controlled by an Arduino board, so this is an economical project. This is a rather sturdy and precise arm too; watch it move stuff!

So what uses did you think of for a robotic arm? Soldering? Or assembly assistant? Handy. But what about opening doors, cooking, or feeding yourself with it? You probably didn’t think of those, but someone in a wheelchair might. It may not seem practical, but combined with the right hardware, these robotic arms can be controlled with thoughts. Sometimes possibility is more important than practicality.