Do you like things? I like things. Thingiverse is all about things. Yours, mine, everybody’s things! It is essentially a virtual library of gadgets, parts, trinkets, and doodads — things. The website is quite modern as online digital object repositories are rather new, since personal 3D printers have only been on the market for a few years. By allowing users to upload various digital formats (usually .STL) of their objects, creativity and functionality are shared, the object-space grows, and a community forms around designing, tweaking, and making. Users can comment on each others’ objects, so sometimes people will upload files that they haven’t tested (printed) yet to see if others have any input that might increase their chances of achieving a successful first print. All communities have social aspects and Thingiverse recently added more social features to the site, further increasing its usability. 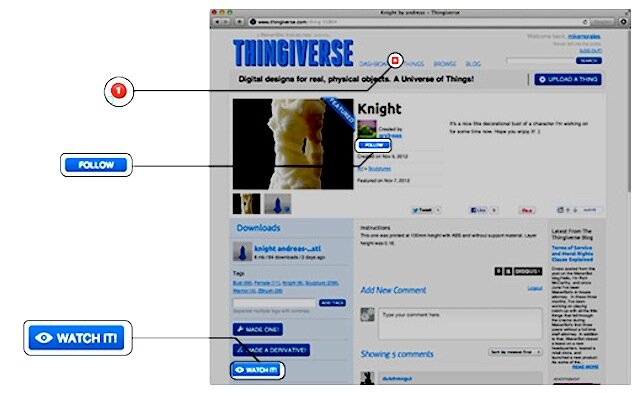 You can tour the new Dashboard here, but the jist of it is a more social-networking site feel, with elements that seem influenced by Facebook and Google+. There’s a “feed” that shows recent activity of users and objects that you’re following, as well as a sidebar that tracks how many followers you have and how many you’re following. You can tag categories of interest and you also get instant alerts related to the activity of others and their interactions with your objects. This better facilitates communication and therefore the whole experience becomes more engrossing. The more that people play with others’ things, the better those things become; people fix, adapt, and completely change the things of others. What separates Thingiverse from other online object depositories like Shapeways, the Cubify Store, and other object-creator sites like i.materialise is its freeness, and this draws a crowd.

Users upload everything from musical instruments, tools, apparel, printer parts, and even robotics. So far the site has been popular with over 25,000 objects uploaded, and hopefully this Dashboard will further that success because the free sharing of things is just cool. The trend is nearly unheard of in capitalist societies but the internet is not bound by the same rules of trade; sometimes people actually share for the sake of being generous. Sometimes they just want people to acknowledge their hardcore make skills. Either way I’m good with it. So go check out the new Dashboard; I think you’ll like it. If not, maybe you’re looking for something a little more risque.