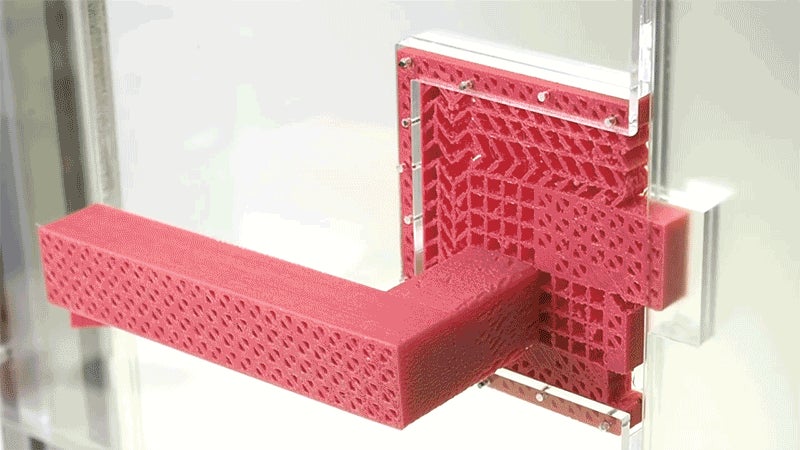 By now, we all know that 3D printing has many applications. Researchers at the Hasso-Plattner-Institut have found a way to 3D print a door handle that doesn’t have any moving parts.

So how do you replicate an object that moves when you’ve eliminated all of its moving parts? By using something called metamaterials which rely on an internal grid of cells, aligned in specific patterns, to give them mechanical properties. The Hasso-Plattner-Institut researchers took things one step further by developing metamaterials that allowed for repetitive and pre-defined directional movement, in order to replicate specific motions or movement.

For example, 3D-printing a door handle and latch isn’t impossible, but it would require you to replicate every last moving part and then assemble them all when complete—a time consuming process. But by using metamaterials, where turning the handle causes the inner cell structure to collapse in a domino effect which then causes the latch to retract, the mechanical object can be 3D-printed in one pass saving time, money, and materials.

The door handle example is a little impractical, since you probably don’t want to use a frail plastic mechanism to secure your home, but the researchers have also designed more useful tools that can be 3D-printed on demand. You might one day have the need for a pair of needle-nosed pliers of a very specific length, and with a 3D-printer you could churn out the exact tool you need, ready to use, without requiring a run to the hardware store.