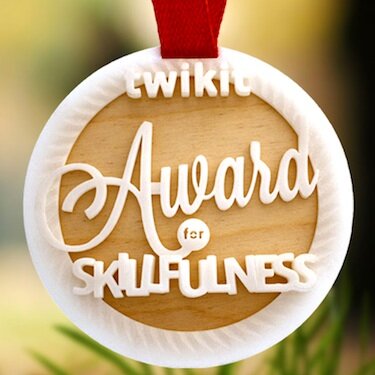 You don’t have to be good at anything to get a trophy. In fact, there are trophies given for doing poorly and for just showing up. Most trophies are little more than some shiny columns resting on a faux marble base, topped with a very breakable plastic figurine or token of sorts, with a miniature plaque that’s superglued to the base and probably doesn’t have your name on it. They’re so generic that it’s hard to feel appreciated when receiving one. What if your name was the trophy though? Leave it to 3D printing to personalize saying “Good job.” Twikit is a new service that allows thankful and appreciative folks to make their trophies personal (worth giving).

The service will be a part of the i.materialise creation corner and it operates as simply as all the other tools hosted there. Much like the Mixee Me avatar creator, Twikit involves only a couple clicks to choose the style, filling in a few text fields, and dragging some sliders to adjust font sizes. Available styles range from medal-like to geometric and in my opinion all are far more pleasant than the standard trophy; I can actually imagine someone sitting this on their desk willingly. Some come with a classy wood base too. There’s definitely more of an inclination to think “Wow, they were totally thinking about me” when receiving one of these, and isn’t that the whole point?

A trophy is never going to be as nice as a promotion or a raise, but it’ll maybe beat out a Red Lobster gift certificate. Maybe. This service is certainly going to make normal trophies appear even more dinky. While their personalization may give an impression that much time went in, it only took me about 20 seconds to do this:

Cameron, Senior Staff Writer, is a technology enthusiast that can better write about 3D printing than he can ride a bike. His interest in 3D printing is mostly driven by his desire to become a cyborg. He enjoys philosophical conversation and is also fond of poetry and Star Trek. Connect with him on Google+. View all posts by Cameron Naramore »
« Sculpteo raises $2.5 million from investors
A Tinkercad spectacle — 3D printed eyeglasses »

One Response to “Personal trophies”