If you’ve ever sat in a plane and looked out your window, you’ll know how interesting it is to try to identify buildings from the air.  Students at the University of Maryland, Baltimore County have used an octocopter to 3D Scan the school’s campus which was then rendered a digital model by Potomac Photonics via 3D Printing.  So now, everyone can see the campus as if from the air while on the ground – in micro-scale.  The digital model of the map is just 1/4,000th of the size of the actual campus, pushing the limits of 3D Printing resolution! 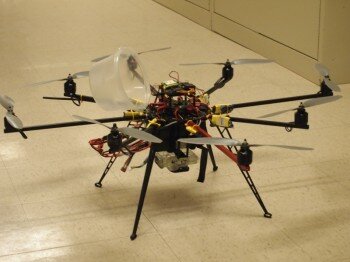 The project was created by mechanical engineering students Stephen Gienow and Lindsay Digman for Ecosynth, an open source program at UMBC in which 3D models of terrain are created from photography taken by small radio-controlled [RC] aircraft.  Although a lot of fun to examine, the main purpose of the scan was ecological study.  Scientific experiments can now be devised using the information gained in the model.

It took over 5,000 photos in three consecutive flights from the Canon Powershot ELPH 520 mounted on the 8-propellered helicopter to get the raw data needed for the 3D Model.  On his blog, Stephen says, “The photos were georeferenced using a custom Python script and run through Agisoft Photoscan to produce 3D models.”  And here’s the result: 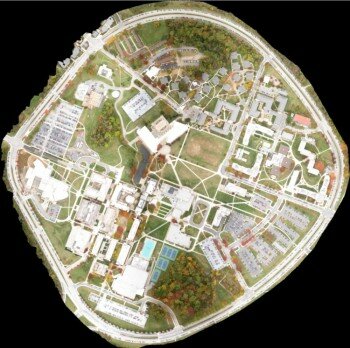 The UMBC students were introduced to Potomac Photonics who are located in the [email protected] research and technology park.  Says President and CEO Mike Adelstein, “We love helping students bring their projects to life so it was great to 3D Print the digital map for Stephen and Lindsay.  Plus it was a lot of fun to see the octocopter at work!” 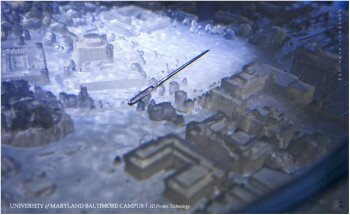 Of course, having a 3D Systems ProJet series 3D Printer in their factory, Potomac had the high resolution needed for a detailed map.  You can even see the detail of the trees!