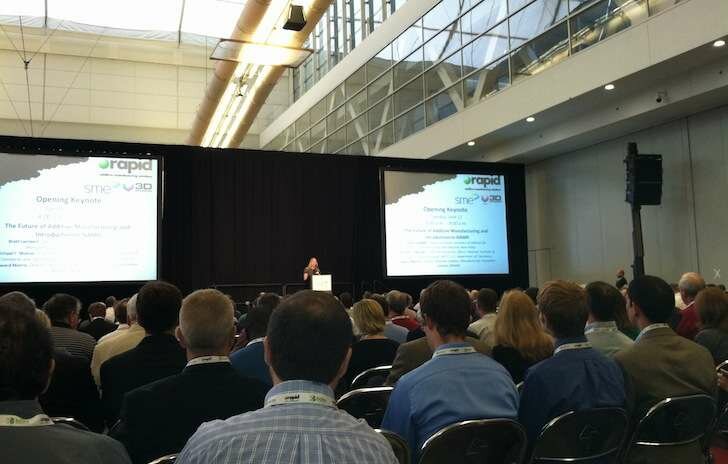 The Society of Manufacturing Engineers RAPID conference opened with 3 keynotes that reiterated the United States Government’s support of all manufacturing and additive manufacturing in particular.

Brett Lambert, the US Deputy Assistant Secretary of Defense for Manufacturing and Industrial Base Policy, opened the session by recounting a childhood growing up on a farm where manufactured parts would make or break a harvest. The impact of onsite digital manufacturing is potentially huge to rural communities and unimaginable to him as a child. As one would expect, the Department of Defense’s support of manufacturing is to ensure that our “men and women in uniform will be the best-equipped military force in the world”. DOD also feels that the “superior advantage America has on the battlefield is enabled by manufacturing.”

Mr. Lambert touched upon major factors the government is facing including living in a more global sourcing environment. Increased competition, ability to more easily collaborate with allies, and learning from each other are positive changes but the truth is that not working globally just isn’t an option anymore. Of course there are significant risks involved such as counterfeiting and leaked intellectual property. It is interesting to note that today only 30% of products brought into DOD are designed and manufactured specifically for the Army, Navy, Air Force or other agencies. As little as 15 years ago, that 30% represented commercial products that were simply purchased. The entire equation has reversed.

DOD’s support of advanced manufacturing is important for the total economic well being of the nation, as well as the military. Mr. Lambert recounts how his daughter and her friends play with TinkerCAD and 3D print instead of watching cartoons, and that there is a new 3D Printing Girl Scout Badge. He sees this as our future. Essentially he’s looking to these kids to “develop things the rest of the world wants to steal” as we again lead the world in manufacturing.

NIST’s Chief Manufacturing Officer, Michael Molnar’s, main concern on the other hand is solely manufacturing’s importance to the economy of the nation. He rightly says that the media hype is “over-heated bluster” and that the truth is somewhere between that and the naysayers. The Commerce Department sees manufacturing as a driving force in the economy and even when there was fear we were becoming a service-providing nation, the truth is there was still significant innovation and manufacturing in the United States.

Mr. Molnar points out that the manufacturing sector is the “mainstay of our economy” contributing $1.8 trillion of our GDP. Also, 1 in 7 jobs in the USA are still in manufacturing. That said, he concedes that the US now has a trade deficit with the rest of the world. He’s optimistic that this will change because the US is still the most productive in the world and there are new trends coming on the global scene such as rising labor costs in previously third world countries.

It seems that additive manufacturing is shifting value added products back to the US and NIST is funding new programs to speed up that process. The Institute is particularly interested in materials and verification of new materials. In safety parts and products, AM is still not used for automotive, aerospace, and medical applications until the testing is complete. NIST is poised to play a significant role in manufacturing innovation to drive the economic engine of the nation.

Ed Morris, Director of the National Additive Manufacturing Innovation Institute [NAMII] closed the keynote, describing the public-private partnership that has the best fan anyone could have: the President of the United States. Interest in the Pilot Institute skyrocketed when President Obama mentioned the new program in his State of the Union address earlier this year.

I knew NAMII had high dues and coordinated grants, but I learned from Mr. Morris’ presentation that the organization works very hard to integrate with the community on many levels and is setting up a new crowdsourcing initiative to drive their new Strategic Investment Plan Roadmap. Innovators can also go to the facility in Youngstown, Ohio to use a wide range of equipment that has been donated by many equipment manufacturers. Perhaps they are more accessible to the average American than first meets the eye.

Crowdsourcing seems to be the topic of the day with GE also announcing a new crowdsourcing project. Watch this space for more detail coming later today about NAMII and GE.

In the meantime, for those of us in manufacturing it was great to hear the support for innovation in new technologies and processes, workforce development and education from our leaders in Washington.

Disclosure: I am a member of the Society of Manufacturing Engineers.