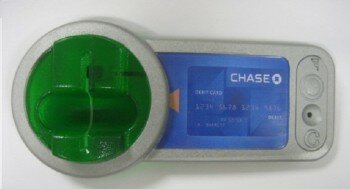 While 3D printing technology is being used to produce positive changes in the world, unfortunately, crooks have also taken advantage of 3D printing, using it to more efficiently perfect their crimes.

Criminals are now using 3D printing to create devices known as “skimmers,” devices which are imbedded into ATMs and used to steal bank information and pin codes from unsuspecting ATM users.

A “skimmer” is a device that fits neatly over the ATM’s card slot, and is designed to read, or skim, the information off an ATM card’s magnetic strip. Often these skimmers are accompanied by tiny pinhole cameras and keypad overlays that criminals place over the ATM’s keypad.

3D printing allows ATM skimmer devices to be made more accurately and efficiently. A 3D printer’s ability to print quickly and accurately allows crooks to easily print these devices and make modifications to skimmers with ease.

According to Sydney police, the first case of ATM skimming machines made with 3D printed devices appeared last year, and with the increasing popularity of 3D printers, this is just the beginning. The crooks aren’t just operating in Australia, according to an ad posted on an underground “carder” website, one criminal group which sells ATM skimmers has bases in Moscow, South Africa, Australia, the USA, and the UK.

The police in Queensland are warning ATM users to take extra precaution when using ATMs, cautioning people to stay alert and looking out for anything suspicious. While the 3D printed skimming parts are designed to look official, as though they are part of the ATM, there are some tips that ATM users can use to spot an ATM that has been tampered with.

And remember to stay safe and aware –it’s your best line of defense.