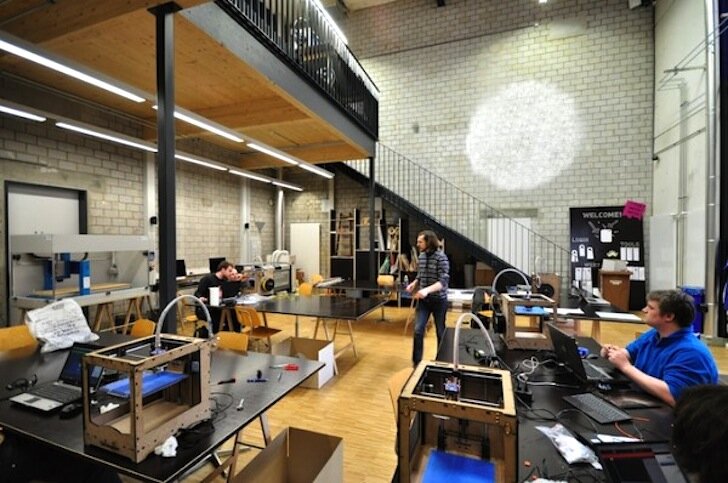 The Fablab Luzern in Switzerland

Before my grandpa sold his house, he had a pretty impressive workshop, and it often seemed that my dad used it just as much, if not more, than my grandpa. My dad would spend many weekends in that shop drilling and milling after drawing designs throughout the week; he didn’t have his own workshop for a few reasons, but space and cost were the main ones. So it made sense that when he needed a new tool, that’s usually where it stayed, at the shop, and then my grandpa (and uncle) could use it too. It was like a community of tools, because tools can be expensive, and two milling machines is redundant. While workshops will never disappear, they’ve been evolving for some time, and their configurations have fragmented into places called hackerspaces, makerspaces, and fablabs. So what the hack are they?

Hackerspaces pull from and extend upon the more classic, pre-MIT definition of hack, as in cutting something apart, but then there’s an element of improvement tacked on too. From Wikipedia, “Hackerspaces can be viewed as open community labs incorporating elements of machine shops, workshops and/or studios where hackers can come together to share resources and knowledge to build and make things.” So these places will give members access to machining tools like lathes, drill presses, table saws, and any other tools that may or may not require more space and/or money than any of the individual members have access to. What makes hackerspaces different from my grandpa’s workshop is that instead of access being granted based on blood relation, it’s based on fees, which is how the space and all the tools are paid for. Some hackerspaces also generate revenue by selling things that members make at places like flea markets, and so members can pay with stuffs instead of monies. Often these places will hold events like build nights and how-to’s, sometimes inviting non-members to come and check out the fun.

So what about makerspaces? Makerspaces are essentially hackerspaces that might have an emphasis on making new things over modifying and improving things that already exist, but that’s subjective and not even necessarily true, so it’s okay to use the terms interchangeably.

So what about fablabs? Well these are the more modern version of makerspaces, employing more computer-controlled tools, like CNC machines, laser cutters, printed circuit board milling systems, and 3D printers. While some of the tools are subtractive, additive manufacturing is front and center, as well as the means to fabricate electronics. The fablab concept arose from classes like MIT’s How To Make (Almost) Anything, which is still offered, and their Center for Bits and Atoms, which has millions of dollars in digital fabrication equipment and a goal of being able to produce anything with molecular assemblers [https://3dprinter.net/nano-speculation-on-printing-immortality]. Everything from “solar and wind-powered turbines, thin-client computers and wireless data networks, analytical instrumentation for agriculture and healthcare, custom housing, and rapid-prototyping” is researched at fablabs. These places [http://fab.cba.mit.edu/about/labs/] are often found in universities, and so access is usually limited to students, teachers, and alumni, though I expect that will be changing as the tools are becoming more accessible and affordable.

The point of all these places though, hacker/makerspaces and fablabs, is to create, innovate, and communicate with fellow fabricators. These spaces demonstrate that factories and foundries are no longer necessary to produce awesome things. If you have one in your area, I recommend you go for a visit. You may just get inspired.

Cameron, Senior Staff Writer, is a technology enthusiast that can better write about 3D printing than he can ride a bike. His interest in 3D printing is mostly driven by his desire to become a cyborg. He enjoys philosophical conversation and is also fond of poetry and Star Trek. Connect with him on Google+. View all posts by Cameron Naramore »
« 3Doodler: world’s first 3D pen that draws in the air ($1 Million Raised Already!)
Bioprinting scary, terrifying and eerie, says RT News »