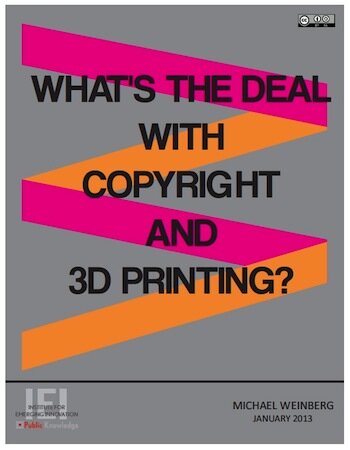 Back in November 2010, Michael Weinberg, Vice President of the Institute for Emerging Innovation at PublicKnowledge.org, published a whitepaper called It Will Be Awesome if They Don’t Screw It Up: 3D Printing, Intellectual Property, and the Fight Over the Next Great Disruptive Technology, which examined the general connection between intellectual property law and 3D printing. Slightly ahead of its time, it was well-received and widely distributed.

A lot has happened in these past two years. The world has discovered 3D printing and makers are creating most anything you can think of in an accelerating volume (over a million prints on Shapeways now) and at higher quality. Some companies have responded with copyright takedown notices as IP violations become more common. Even congress is getting involved now, looking at another industry they can overregulate.

In light of all that has changed since his first report, Weinburg as just published a new whitepaper at Public Knowledge, a followup to It Will Be Awesome. This one is called What’s the Deal with Copyright and 3D Printing? and looks much deeper into the subject.

I have not yet read the report, but wanted to get the link out to you now, as it was just released. I’m interested in hearing your opinions after you read it. Please post your comments below.

You can read it at the link here, or download a PDF of it through a link at the bottom of that page. You can also buy it on Amazon for $4.99, but not sure why you would do this since you can read it online free and even download — unless the 45 page book is an expanded version, but I see no reference to that.

Careful, the whitepaper is copyrighted.