The big news in the world of 3D printing last week is that President Obama mentioned 3D printing in his State of the Union speech:

“There are things we can do, right now, to accelerate this trend. Last year, we created our first manufacturing innovation institute in Youngstown, Ohio. A once-shuttered warehouse is now a state-of-the art lab where new workers are mastering the 3D printing that has the potential to revolutionize the way we make almost everything. There’s no reason this can’t happen in other towns. So tonight, I’m announcing the launch of three more of these manufacturing hubs, where businesses will partner with the Departments of Defense and Energy to turn regions left behind by globalization into global centers of high-tech jobs. And I ask this Congress to help create a network of fifteen of these hubs and guarantee that the next revolution in manufacturing is Made in America.”

What was launched in Ohio was the first National Additive Manufacturing Innovation Institute (NAMII), which under the National Network for Manufacturing Innovation (NNMI), is a US military-led public-private partnership to provide the innovation infrastructure needed to support new additive manufacturing technology (3D printing). You can learn more about that Youngtown institute in this article of ours from last year.

While Obama mentioned this in the State of the Union, the initiative began last year, and people and organizations have been very busy working to move NAMII forward. One group involved is the Information Technology Innovation Foundation (ITIF) and last December they held an event called “Why America Needs a National Network for Manufacturing Innovation,” which you can watch in its entirety in the following video. Warning, this video is for policy wonks — you’ll know right away when you begin watching it if it’s for you.

Here’s what ITIF says about NNMI, and their “Why America Needs a National Network for Manufacturing Innovation” event:

In perhaps the boldest initiative to revitalize American manufacturing since the 1988 passage of the Omnibus Foreign Trade and Competitiveness Act, the Obama Administration has proposed investing $1 billion―to be matched by private and state funds―to create a National Network for Manufacturing Innovation (NNMI). The Institutes that make up the Network would each focus on a significant, industry-defined innovation challenge. They would be full-service innovation hubs that support user facilities, conduct technology roadmapping, provide education and training, engage with small and medium manufacturers, and carry out applied research, with an emphasis on manufacturing processes. NNMI holds the potential to bridge the gap between industry and academia and to stimulate investment in American manufacturing facilities and enterprises as a new wave of global competition in manufacturing is breaking across the economic landscape.

This event featured the release of a new paper authored by David Hart in conjunction with ITIF that explains why creating a national network for manufacturing innovation is crucial to America’s manufacturing competitiveness and should thus receive high priority from policymakers. The report further articulates key principles that should guide the development of the NNMI, including: how the specific Institutes should be selected, funded, and governed; what roles small manufacturers, large manufacturers, universities, community colleges, state and federal agencies, and other actors should play in the Institutes; and what benefits the United States should expect to accrue by establishing an NNMI. 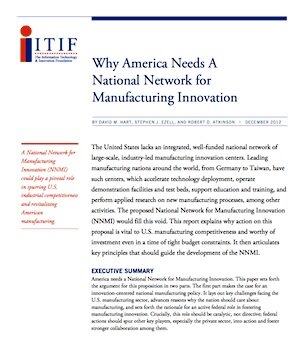 As mentioned in the excerpt above, there is a paper written to go along with this event, titled with the same name, written by David M. Hart, Stephen J. Ezell and Robert D. Atkinson. You can download the PDF of it here. Executive Summary of the 27-page report reads as follows:

America needs a National Network for Manufacturing Innovation. This paper sets forth the argument for this proposition in two parts. The first part makes the case for an innovation-centered national manufacturing policy. It lays out key challenges facing the U.S. manufacturing sector, advances reasons why the nation should care about manufacturing, and sets forth the rationale for an active federal role in fostering manufacturing innovation. Crucially, this role should be catalytic, not directive; federal actions should spur other key players, especially the private sector, into action and foster stronger collaboration among them.

The second half of the paper articulates five key principles that should govern the design of the NNMI. These principles are: