Biomimicry, or the imitation of nature and natural systems for the purpose of solving or addressing human problems, can be quite effective. 3D printing is a suitable technology for exploring and executing biomimicry as it can produce very small objects, complex objects, and it can work with live tissues. However, it’s possible that human sciences can enable materials and methods that surpass the performance of natural systems. To test and demonstrate that ability, engineers at MIT have 3D printed a material that has a fracture resistance that is similar to bone; their work was published in Advanced Functional Materials. 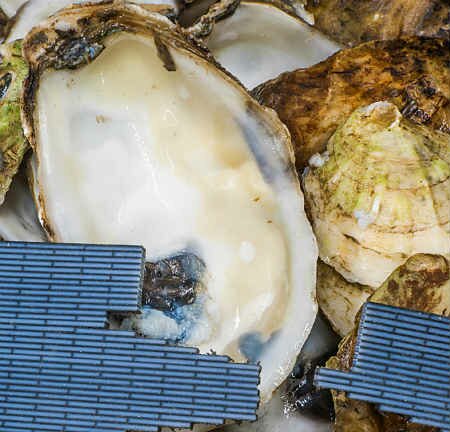 Brick-and-mortar pattern of simulated bone and nacre against the backdrop of real nacre found in the inner shell of many mollusks.

With funding from the US Army Research office, Markus Buehler, associate professor of the Department of Civil and Environmental Engineering, graduate students Leon Dimas and Graham Bratzel, and Stratasys applications team leader Ido Eylon used computer-optimized models based on nature to produce 3D printable materials that have similar characteristics to their natural counterparts. Buehler has studied the molecular structures of biomaterials and commented, “The geometric patterns we used in the synthetic materials are based on those seen in natural materials like bone or nacre, but also include new designs that do not exist in nature.” Bone is made of primarily two substances: soft collagen protein and stiff hydroxyapatite mineral; their hierarchical arrangement is what causes bone to be strong and flexible while remaining light.

“The researchers created three synthetic composite materials… The first sample simulates the mechanical properties of bone and nacre (also known as mother of pearl). This synthetic has a microscopic pattern that looks like a staggered brick-and-mortar wall: A soft black polymer works as the mortar, and a stiff blue polymer forms the bricks. Another composite simulates the mineral calcite, with an inverted brick-and-mortar pattern featuring soft bricks enclosed in stiff polymer cells. The third composite has a diamond pattern resembling snakeskin. This one was tailored specifically to improve upon one aspect of bone’s ability to shift and spread damage.” The bone-like material exhibited fracture resistance 22 times greater than the stronger of the two materials that it was made of. The team obviously had access to a multi-material 3D printer, likely a Stratasys.

Before the materials were printed, they were tested in a computer simulation. To the delight of the researchers, the results from the simulation matched the results of reality. “Most importantly, the experiments confirmed the computational prediction of the bonelike specimen exhibiting the largest fracture resistance,” said Dimas. That’s important because simulations can run faster than reality, and accurate simulations give insight into what materials not to produce, thus saving resources.

The synergy of biomimicry, computational simulation, and 3D printing is also noteworthy. Jennifer Lewis, the Hansjörg Wyss Professor of Biologically Inspired Engineering at Harvard University said “The power of integrating design, computational modeling and 3-D assembly will only be fully realized when these tools are combined to generate entirely new ‘metamaterials’ — in other words, ones that today do not exist in either engineered or biological forms.”

Buehler believes the method can be scaled up to create buildings; such architecture may be resistant to storms and earthquakes. But what about scaling it down? Perhaps actual bone replacements could be developed for those that get cancer, suffer injuries, or just want tougher limbs. Buehler related, “The possibilities seem endless, as we are just beginning to push the limits of the kind of geometric features and material combinations we can print.”