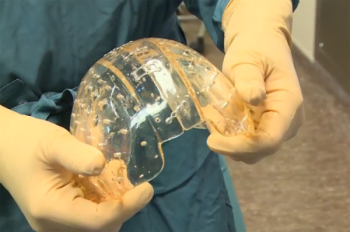 3D printing is creating new and exciting possibilities in the field of medicine.

With 3D printing, replacement surgical implants are becoming available on demand and assisting in many lifesaving surgeries.

Most recently, 3D printing was used to create a cranium replacement for a 22-year-old Dutch woman. The woman, who was suffering from a rare disease which caused her skull bone to continue to thicken, had a complete cranium replacement. According to the hospital, this procedure is revolutionary, one that hasn’t been done before.

The woman’s condition had caused her skull to thicken to the point of 5 cm, normal skull thickness is 1.5cm. This caused pressure to be placed on her brain, taking away her ability to make facial expressions and even affecting her vision. Doctors said it was only a matter of time before she would lose other crucial brain functions and eventually die.

The operation took place at UMC Utrecht in the Netherlands. The surgeon, Bon Verweij, preformed the surgery to replace her cranium with a 3D printed one made from plastic. Verweij had gained extensive practice with 3D reconstructions and printing skull bones before he proceeded, and eventually decided that a plastic version would best suit the needs of his patient. The team designed the 3D model of the patient’s skull and sent it to be printed by an Australian firm that specializes in 3D printing.

While the team has done surgeries involving the replacement of skull bone sections, the entire replacement of the cranium has never been done before. The surgery, which lasted for nearly 23 hours, was performed with Verweij together with Marvick Maradin.

The team waited three months to announce this operation to make sure everything was successful. According to Verweij, the woman is back to work now and has even regained her eyesight.

Both the patient and surgeons are pleased with the results and there is hope for future surgeries that could offer options for patients with head trauma or even cancer.