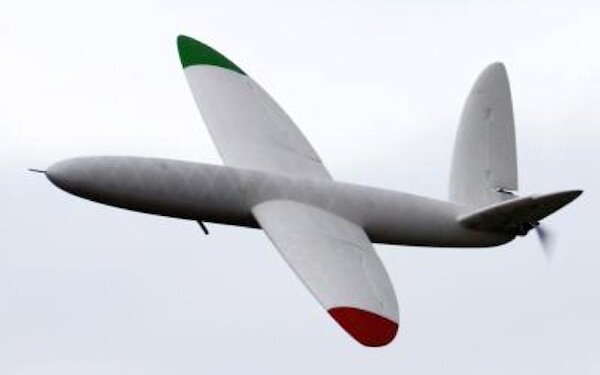 Just when you think you’ve seen it all in the new world of 3D printing, along something that tops it all. We’ve seen 3D printers outputting unbelievable, functioning objects with moving parts, but what you see in this photo beats them all. That’s not just a small model airplane that your kids than toss into the wind for a nice glide. It’s a fully functioning, 2-meter wingspan aircraft that flies at a top speed of 100 mph!

Over a 48-hour period, it was printed layer-by-layer on an EOS EOSINT P730 nylon laser sintering machine. It didn’t come off the printer in as one unit, but was printed in pieces. However, there are no fasteners used, and everything is snapped together without tools. In minutes!

While the UAV tops out at 100 mph, it cruises silently at lower speeds, and even includes a simple autopilot.

The University of Southampton’s press release describe the building process:

Laser sintering allows the designer to create shapes and structures that would normally involve costly traditional manufacturing techniques. This technology allows a highly-tailored aircraft to be developed from concept to first flight in days. Using conventional materials and manufacturing techniques, such as composites, this would normally take months. Furthermore, because no tooling is required for manufacture, radical changes to the shape and scale of the aircraft can be made with no extra cost.

While this is a University project, don’t be fooled into thinking that there is no practical use for it. SULSA is part of the EPSRC-funded DECODE project, which is employing the use of laser sintering and other leading edge manufacturing techniques to demonstrate their use in the design of UAVs. This could revolutionize not just UAV development, but eventually full sized aircraft as the printers become larger and more advanced.

As one of the leads of the University’s Computational Engineering and Design Research group, Professor Jim Scanlon says: “The flexibility of the laser sintering process allows the design team to re-visit historical techniques and ideas that would have been prohibitively expensive using conventional manufacturing. One of these ideas involves the use of a Geodetic structure. This type of structure was initially developed by Barnes Wallis and famously used on the Vickers Wellington bomber which first flew in 1936. This form of structure is very stiff and lightweight, but very complex. If it was manufactured conventionally it would require a large number of individually tailored parts that would have to be bonded or fastened at great expense.”

If you find this convergence of robotic vehicles, particularl UAVs, and you’re still young enough to further your education, the University of Southampton is launching a groundbreaking course which enables students to get a Master’s Degree in unmanned autonomous vehicle (UAV) design. If you’re interested, get in touch with them.