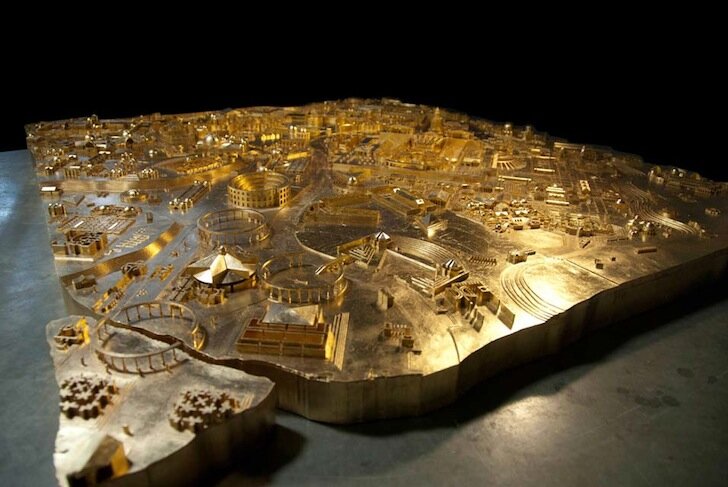 You know the saying, “Rome wasn’t built in a day.” That’s right, it was built in a semester.

Twelve Yale students and their professor were so blown away by six etchings of ancient Rome, made by architect and mapmaker Giovanni Battista Piranesi, that they set out to recreate the etchings in three dimensions, via 3D printing. Not only that, they covered it in gold leaves to produce the brilliant display that is wowing both art and architecture patrons at the Venice Architecture Biennale. 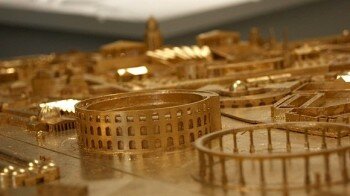 Yale’s Beinecke Rare Book and Manuscript Library housed Piranesi’s 250 year-old portfolio, and with it Yale Professor Peter Eisenman and his students used 3D modeling programs to digitially recreate Rome, based upon their interpretation of the etchings. Also lending a hand were Yale School of Architecture Director of Exhibitions Brian Butterfield and global 3D printing company Materialise

After the city was 3D printed they decided it needed a bit more shine. That when artist Pasquale stepped in and spent two weeks applying the gold leaf finish. As you can see, “The Piranesi Variations” is quite an eye catching piece now.

You should know that this is no small model–it measures 1500 x 1300 x 90 mm (that’s roughly 5 ft x 4ft 3in x 3.5 in”). It was then printed on Materialise’s biggest 3D printer, the Mammoth Stereolithography machine. Materialise created this huge 3D printer to build single-piece stereolithography models with dimensions of more than two meters.

If you are interested in more detail about Piranesi and the etchings, read this piece in Art Daily.

Mark is the founder of 3DPrinter.net. He encourages anyone reading this to submit their own article for publication. Connect with him on his Google+ account. View all posts by Mark Fleming »
« 3D models need structure in their lives
3D-printable gun project hits its fundraising goal despite being booted off Indiegogo »