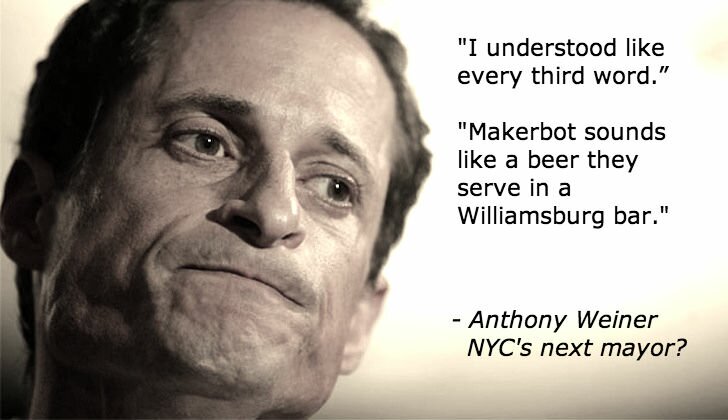 Politicians seem to never miss an opportunity to prove that they are as clueless as we all know they are. And Monday night four candidates for Mayor of New York showed their ignorance in a forum on tech policy in Queens. In attendance was amateur photo enthusiast, Anthony Weiner, just one in a long line of the latest disgraced politicians to ask (and likely receive) for the forgiveness of voters.

Near the end of the forum’s Q&A period, an attendee asked the following question that sent candidates Weiner, Sal Albanese, Adolfo Carrión Jr., and John Liu into a state of complete bewilderment:

“We happen to believe because we have Shapeways and Makerbot in this town already, that this an opportunity for a new cluster in 3D printing. Would the panel like to discuss how you, as mayor, might support such an initiative?”

Now, before reading further, if you’re new to the world of 3D printing you have to understand that having Shapeways and Makerbot (just bought out for $400 million today), in New York’s “Silicon Alley” area is a BIG DEAL. New York’s Manhattan and surrounding areas are not exactly known for manufacturing these days. But here are two of the hottest companies in the hottest tech industry this year, right there in New York. Plus, dozens of other companies and perhaps thousands of independent designers and engineers are also in the area, working with 3D printing. It’s a very big deal.

So, just how would the candidates support 3D printing? Weiner, obviously dumbfounded, stepped up first and joked, “I understood like every third word.” Later, he said that Makerbot “sounds like a beer they serve in a Williamsburg bar.” Funny stuff, Mr. Weiner. I would love to have heard the laughs of all the makers in the crowd.

But did the other three candidates fare any better? Well, let’s put it this way: Motherboard’s article which reported this story, while quite in depth, did not contain any responses from the other candidates. So I can only assume they too were flummoxed by the question, and kept their mouths shut to let Weiner alone make a dick of himself.

It’s a sad state of affairs that everyone from my gardener to any random guy on the stool next to me at a bar has heard of 3D printing, yet apparently these politicians who intend to lead New York into the future apparently haven’t even read one of the thousands of articles in virtually every news source, about a technology that surprisingly seems to have its epicenter — and two very important companies — in their city.

And that’s why I like the government to keep their hands out of “helping business;” but I digress.