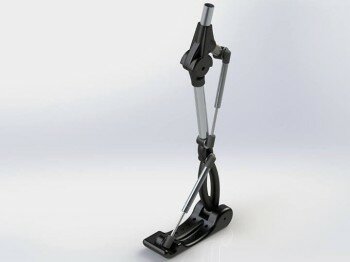 You’ve probably heard of Robohand, the open source project that has provided people around the world with affordable and practical 3D prosthetic hands.

Founded in 2012, Robohand was first started by Richard van As and Ivan Owen, after a tragic work-related carpentry project in which Richard van As lost four fingers. Determined to find a solution to his problem, and finding no affordable prosthetics available, Richard teamed up with designer Ivan Owen to create one.

The Robohand was developed in January 2012. Robohand is a prosthetic robotic hand that uses 3D printed components. It’s open source, so anyone with access to a 3D printer can create the prosthetic hands. Since then, the Robohand project has expanded to include arms, and now fingers and legs as well.

The design for the Robofinger was created in 2013, after Dave Phillips heard about Robohand and contacted Richard to see if he could help. Dave had lost most of his left index finger after being bitten by a brown recluse spider. Without a finger, Dave wasn’t able to complete many of his hobbies and work. As a musician and painter, Dave’s fingers were of great importance.

Richard van As set to work making a 3D printed finger for Dave. He took measurements of Dave’s hand, and began preparing a hand cap. Preparing the cap was a long, complicated process that involved a lot of cutting and sanding. Once the cap was ready, Richard began attaching additional parts and pieces to create the finger. Within a few weeks, the robotic finger was ready. The Roboteam says that the smile on Dave’s face made all the work on the Robofinger worth it.

On Monday, the very first photo of RoboLeg was released by the Robohand team. The Roboleg uses 3D printed components, pneumatic pumps, and pipes in its simple and functional design. While it’s still considered a work in progress, the team says it will update the setup details very soon. Thanks to the tireless work of the Robohand team, this development will help many people regain their mobility and their lives once again.