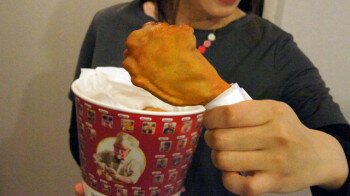 With 3D printing becoming more mainstream, companies around the world are using this technology to help promote their businesses.

The order of business that’s on the menu today? 3D printed KFC.

To make the 3D printed drumstick, the team at iJet scanned an actual KFC drumstick into the computer. A few modifications were made on the original scan before the printing process began.

The 3D printed drumstick was made as a gift to Japanese reporters from the website “Lifehacker” after a recent visit. The drumstick was made from plaster and a process that involved jetting colored liquid onto each layer and building from there, one layer at a time.

The result is said to be heavier than a normal piece of chicken and more fragile as well.

Apparently it looked real enough to the reporter who was gifted the treat. He said that when he opened the package, he hesitated to touch it because he was concerned about the grease sticking to his hand.

But now that the scanned image of the chicken drumstick is in the computer, the fun has just started. By adjusting the scale of the drumstick model to a much smaller level, the team came up with the ultimate 3D printed gift -KFC chicken drumstick earrings. Who wouldn’t want a pair of those?