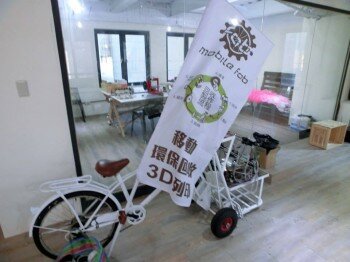 3D printing has hit the streets in Taipei, Taiwan with the mobile plastic shredder and 3D printer called the “Mobile Fab.” The Mobile Fab is a bike that’s equipped with a mini-factory of sorts. Complete with a shredder for plastic, a filament extruder, and a 3D printer.

The goal of the Mobile Fab project is ‘to promote 3D printing on the streets’ using material from recycled plastic products like old bottles.

While most 3D printing filament replacement cartridges are expensive, the Mobile Fab can turn recyclable bottles into free 3D printing material, and it can all be done immediately – on the streets.

Han Kaiyu, the co-creator of the Mobile Fab, along with three friends, founded the “Fabcraft Design Lab” last year. The Mobile Fab was then created out of that lab.

The idea to mount a 3D printer onto a bicycle was not just to take it mobile but also to transform the bike into a mobile station that integrates both environmental protection as well as helping to promote new technology.

Before the Mobile Lab was built, the team researched ways to transform plastic into 3D printable materials. Then, the recycling and 3D printing station was loaded onto a bike.

Han Kaiyu says that the mobile factory is familiar to the people of Taipei. “We want to use the most familiar method to promote 3D printing,” he says. The process allows people to watch the 3D printing take place, in less than half an hour, from plastic items they can bring themselves.

Han Kaiyu says that the hope is to change the way of thinking in Taiwan’s design industry and to show the value of recycling, as well as the convenience of 3D printing.

Han doesn’t plant to stop here though; the next project that he has planned is another Mobile Fab. This time, a truck version.