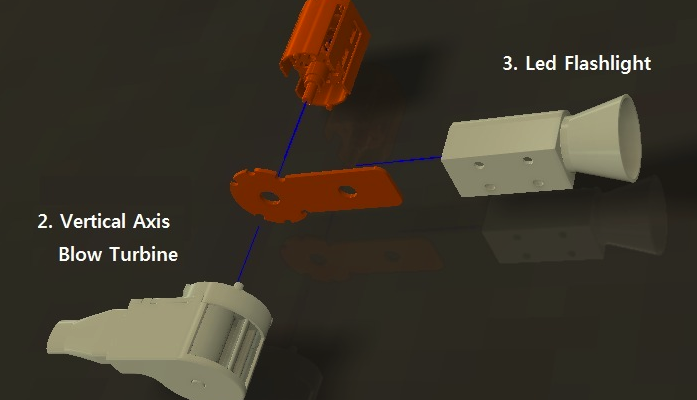 A man from South Korea has invented a flashlight that can be powered by blowing into it.

Tim Cho was inspired by Makerbot’s “Catch the Wind” challenge.

“I was designing and printing a hand-winding crank LED Flashlight like Dynamo,” Cho told 3DPrint.com. “I wanted to create something for the #CatchTheWind Thingiverse Challenge, but there were already many wind-powered flashlights. So I thought I could use ‘blow power’ instead of wind power, kind of like a whistle.”

He also explained how he managed to get the whole thing to work.

“When you strongly blow in through the mouthpiece, the vertical axis turbine and the magnets of the generator are rotating together. The shafts of the turbine and generator are directly connected. Then the coils of the generator makes AC (alternating current). The bridge rectifier circuit converts an AC input to a DC output. By blowing, the voltage generated creates about DC 0.5~1 volts. To light up an LED though, you need about DC 3 volts. For boosting voltage, I used a Joule thief circuit.”

Cho admits the design is not perfect. For example, if you blow for too long you get light-headed, making the current design more of a novelty than something that can be employed for disaster use.

Still, it is a great idea, especially from a Maker relatively new to the 3D print world and another example of the amazing thing people from all walks of life can do with a 3D printer and a bit of imagination.