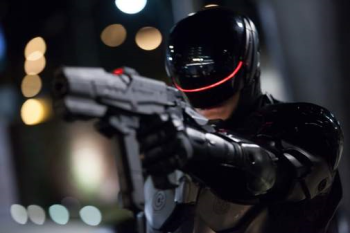 With the new Robocop film remake hitting theaters around the globe this week, many are wondering about the suit that Robocop wears.

With the older, 1987 version of Robocop, Robocop’s suit was bulky, boxy, and silver. The new Robocop movie, though, sees Robocop wearing a sleek, shiny black, stealthy suit. The new suit just so happens to have been 3D printed on high-definition 3D printers.

At first, the new suit seemed to receive a lot of negative feedback – after all, it looked different than the original Robocop’s suit which was silver, not black.

According to 3Ders, Martin Whist, the production designer of Robocop, says that the new suit was designed to appeal to a contemporary audience. “It was really important to us to get the design right because we’re fans. It’s this iconic suit, but many of its elements would appear dated to the eyes of a contemporary audience coming to the franchise for the first time.”

The team designed a couple of different Robocop suits. One of the suits looked like an updated version of the original suit. The other suit was black with a red glowing visor. Whist said that the sleek, dextrous design was based on real world materials, such as graphene.

After creating the designs, the team sent the 3D models of the suits to Legacy Effects, a company that has made other suits for well-known films such as Iron Man and Avatar.

The components for the suit were printed out on high-definition 3D printers, painted, and assembled into the final masterpieces –Robocop’s suits.